Article by Ron Davidson published June 22, 2022, by Friends of Science Society A pdf of   ▸

It is a sad realization when a celebrity’s integrity and intelligence can be in question with the infusion of money.  This display might be viewed with sadness by our clean hard working petroleum industry.  But then again, this display of contempt for Alberta’s initiatives and our world environmental recognition, is a well funded campaign to degrade and force a nationalization of our resources, through the use of activist comments.   As written in the article, the financial sponsorship is supplied by Aramco an Arabian Nationalist Oil Company.  Albertans please visit the Trudeau Senior; National Energy Program that decimated our petroleum resource, introduced in the year 1980.

Article by Tyler Dawson published June 17, 2022 by the National Post.

The T-shirt said Stop Mining Tar Sands and, below a picture of a pipeline, added Canada's Climate Crime

Sebastian Vettel, a German Formula One driver, became the latest in a long line of celebrities to campaign against Alberta’s oil and gas industry, a practice that has often drawn the ire of provincial politicians.

This week, Vettel, who drives for Aston Martin, arrived on a bicycle at the site of the Montreal Grand Prix wearing a T-shirt with an anti-oilsands slogan.

The T-shirt said “Stop Mining Tar Sands” and, below a picture of a pipeline, added “Canada’s Climate Crime.”

On Friday, Vettel was asked about the T-shirt at a news conference, and he described it as a “small gesture,” adding that he’d be wearing a special helmet to raise awareness about the oilsands.

“I think what happens in Alberta is a crime because you chop down a lot of trees and you basically destroy the place just to extract oil, and the manner of doing it with the tarsands, oilsands mining, is horrible for nature,” Vettel said. “There’s so much science around the topic that fossil fuels are going to end, and living in a time that we do now, these things shouldn’t be allowed anymore, and they shouldn’t happen.”

“It’s just to think about future generations and the world we leave in their hands.… I think it’s only fair to look after it and not destroy it.”

As he spoke, Vettel was wearing a green team T-shirt. Across from the Aston Martin label on his chest was the word Aramco — Saudi Arabia’s state-owned oil giant.

At the time, Lawrence Stroll, the team owner, said the sponsorship would “showcase the sustainability and performance of Aramco’s products.” (Aramco is also a sponsor of Formula One itself.)

“A race car driver sponsored by Aston Martin, with financing from Saudi Aramco, complaining about the oilsands,” she wrote on Twitter. “Rather than demonizing the oilsands, which is on a path to net-zero, people could look to lowering their own personal carbon footprint. Perhaps a pedal-car for Formula 1?”

It’s not the first time Vettel has mused about the future of fossil fuels or has taken a stance on environmental issues.

Earlier this year, he wondered on the BBC program Question Time whether he should be travelling the world racing cars, given the global energy crisis prompted by Russia’s invasion of Ukraine.

“Every time I step in the car, I love it,” he said. “When I get out of the car, of course I’m thinking as well: ‘Is this something we should do, travel the world, wasting resources?’”

A week before, he had arrived at the Miami Grand Prix wearing a shirt that said Miami 2060 – 1st Grand Prix Underwater – Act Now or Swim Later.”

The Montreal Grand Prix will be held on Sunday.

Historically, Alberta — and its government — has been touchy about celebrity condemnation of the oil and gas sector.

The 2014 visit from Leonardo DiCaprio still lingers in the public memory, as does rocker Neil Young’s campaign against oilsands development. In 2018, Jason Kenney — not yet premier — took to Facebook to condemn Bill Nye, the celebrity scientist, who called the oilsands “troubling.”

Even NDP Leader Rachel Notley, while premier, had to contend with a visit from Jane Fonda, who was critical of oilsands and pipeline development.

In fact, the Alberta government went so far as to create a “war room” called the Canadian Energy Centre dedicated to fighting back against slights from celebrities and environmental organizations. In March 2021, it took aim at a Netflix show for children called Bigfoot Family, claiming it was “brainwashing” children with environmentalist messaging. 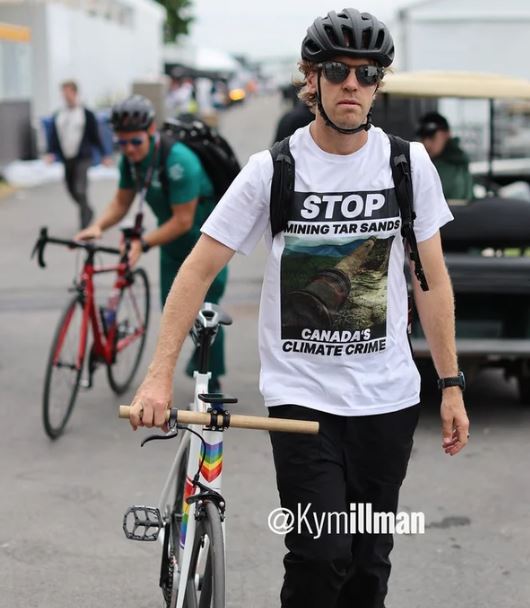