Article by Peter Tertzakian published on Oct 20, 2021 by the Financial Post Renewables going up   ▸

Article by Philip Cross published on October 15, 2021 by the Financial Post      Shortages   ▸


The Mitchell et al 2020 paper examined the tropical temperature trends of models of the Phase 6 Coupled Model Inter-comparison Project (CMIP6) over 1979 to 2014. These new model runs were the basis for the temperature projection in the IPCC sixth assessment report (AR6) which was released August 9, 2021. The paper reports that “the modeled tropospheric trends are biased warm throughout the troposphere (and notably in the upper troposphere, around 200 hPa).” The Canadian model CanESM5 is developed at the University of Victoria. The paper says “We draw attention to the CanESM5 model: it simulates the greatest warming in the troposphere, roughly 7 times larger than the observed trends.” The IPCC reported that the older CMIP5 version of the Canadian model (CanESM2) has an equilibrium climate sensitivity (ECS) of 3.69 °C for a doubling of CO2 which was significantly greater than the average of all the models of 3.28 °C. The cloud feedback was 0.52 W/m2/°C. 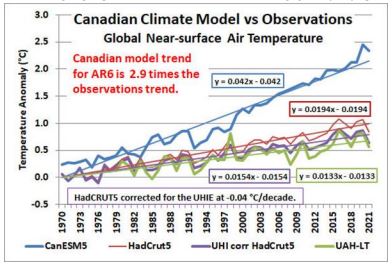 The new CMIP6 version of the Canadian model(CanESM5) has an ECS of 5.62 °C. [AR6 Table 7.SM.5], which is 149% of the model mean of 3.78 °C. The cloud feedback is 0.88 W/m2/°C which is 169% of the previous value and is 180% of the models’ mean. I compared the Canadian model global near-surface trend to the average of the urban-heat-island corrected HadCRUT5 surface dataset and the UAH lower troposphere satellite dataset. The CanESM5 model trend is 2.9 times the average of the actual observed temperatures. A major reason for the Canadian model running so hot is the excessively high cloud feedback being used in the model. The Willis article shows that the cloud feedback is strongly negative.


The new IPCC’s sixth assessment report (AR6) states “The net cloud feedback … is 0.42 [–0.10 to 0.94] W/(m2°C).” Which means that “The net effect of changes in clouds in response to global warming is to amplify human-induced warming.” But that is just because climate modelers parameterized clouds to behave that way.

Willis Eschenbach wrote an article showing that the CERES satellite data implies negative cloud feedback. He wrote “When it gets warmer in the tropics, cumulus clouds form, reflect lots of strong tropical sunshine back to space, reduce the incoming energy, and thus cool the surface. And if warming still continues, thunderstorms form, which cool the surface in a host of ways.” Increasing cloud cover has two effects; they reflect solar radiation which cools the surface, and they absorb and emit long-wave infrared radiation which warms the surface. The sum of the two effects is the “net cloud radiative effect” or “net CRE”.

The issue for climate is; “How is the net CRE related to the temperature?”

Willis produced a scatter plot of net CRE versus average temperature of each 1° latitude by 1° longitude grid cell of the CERES satellite-based dataset, using 21-year averages. The slope of the data shows how much the CRE changes per degree of temperature change, which is the net cloud feedback. At temperatures below -20 °C and from 15 to 26 °C the slope is positive. From -20 to 15 °C and 26 to 30 °C the slope is negative. Strangely, Willis didn’t calculate the resulting global average net cloud feedback from this curve, so I digitized the curve and calculated the global net cloud feedback of -2.6 W/m2/°C. [Excel file here] 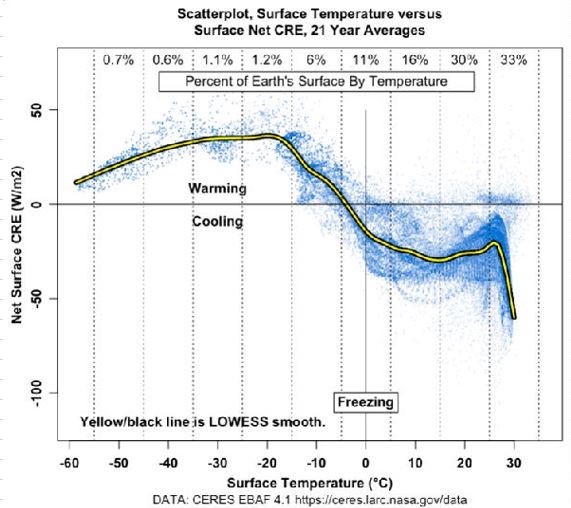 Willis also calculated the net cloud feedback by comparing the CRE at gridcells surrounding each gridcell. He calculates the trend of CRE versus temperature at each gridcell from the 9 by 9 block of gridcells around it. The resulting map shows that the global average net cloud feedbacks is -1.9 W/m2 /°C. Both methods give strongly negative cloud feedbacks, contradicting the positive feedbacks estimated by the IPCC based on model parameterization. This is an important reason that the climate model simulations forecast an overwarmed Earth when compared to the actual observed measurements. 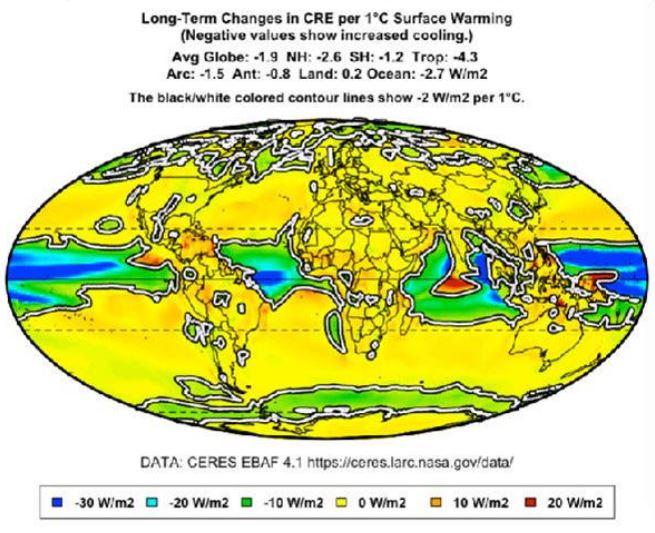 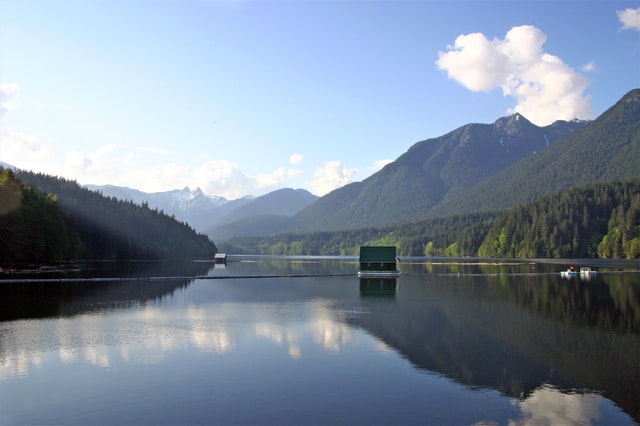 Photo by Manish Tulaskar on Unsplash