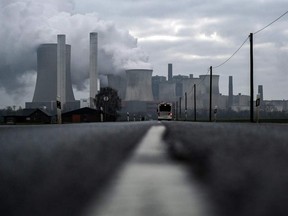 A bus drives on a road as steam rises from the cooling towers of the lignite-fired power plant of German energy giant RWE in Niederaussem, western Germany. PHOTO BY INA FASSBENDER/AFP VIA GETTY IMAGES FILES

The detailed origins of today’s global net-zero carbon emissions crusade are not well documented, but one story may well explain the current global policy shambles that appears headed for major disruption, if not failure. The recent 2022 BP Energy Outlook shows Net-Zero 2050 going nowhere as current trends point to carbon emissions staying steady over the next decades — an assessment that predates Russia’s invasion of the Ukraine.

How did global fossil fuel policy come to this? It all started, apparently, back in 2013 when — according to a climate news feature — a group of women sat around the kitchen table at Glen House, a country estate near Scotland. Among the women were Christiana Figueres, then head of the UN climate agency, and such global climate activists as Farhana Yamin, Jennifer Morgan and Laurence Tubiana. According to Yamin’s version of events at Glen House, they were part of a group of about 30 lawyers, diplomats and activists who hashed out the founding political principles of net-zero emissions as part of a mission to ignite action at the upcoming 2015 Paris climate conference.

As a group, they were the ”lionesses” of net zero, the “mothers” of carbon neutrality — according to Yamin — who struggled and debated and clashed before landing on a solution that would overcome one of the major climate policy hurdles. With no way to secure global agreement on the impossible green radical dream of eliminating fossil fuel emissions, the idea of net zero was allegedly born.

Zero emissions would fail, but the idea that emissions could be calculated, targeted and offset emerged as a political winner.

From Glen House, championed by activists and leading climate bureaucrats, the radical idea went on to be entrenched as a global movement. One of the Glen House players, Jennifer Morgan — now the head of Greenpeace International — was an adviser to German chancellor Angela Merkel, the “climate chancellor.” At a G7 meeting in 2015, Merkel is said to have beat back Canada and Japan to force a declaration that said, “Deep cuts in global greenhouse gas emissions are required with a decarbonization of the global economy over the course of this century.” With that G7 blessing, 200 nations at the Paris climate conference later that year committed “to achieve a balance between anthropogenic emissions by sources and removals by sinks of greenhouse gases in the second half of this century.”

From then on the net-zero concept expanded as the lionesses returned to their real missions. Merkel adviser Jennifer Morgan went on to head Greenpeace. Farhana Yamin — a leading author for the UN climate panel and a framer of the Paris agreement — moved to Extinction Rebellion. In 2019 she earned fame for having glued herself to Shell’s head office in London. “It took about 20 minutes or so to unglue me,” she said. She says she is an activist because the world cannot “rely on lawyers and diplomats alone” to reduce carbon emissions.

The origins of today’s net-zero carbon neutrality movement, in other words, can be found more in radical politics and global activism than in any hard science or evidence that the concepts are valid and achievable — although there is some scientific thinking lurking in the background.

A recent outline of the history of net zero by three British environmental scientists traces it back to the 1990s. Early suggestions included the mass planting of new forests. But the numbers didn’t work, which led to a focus on computer models that could be manipulated to find “other pathways.” The models seemed like “a miracle,” say the British scientists. “You could try out policies on a computer screen before implementing them, saving humanity costly experimentation.” The core modelling solution was to postulate carbon sinks and, ultimately, carbon capture and storage.

The three U.K. academics — James Dyke, Robert Watson and Wolfgang Knorr — see climate change as a genuine crisis that requires drastic action, but they see net zero as “a dangerous trap.” The official net-zero campaigners led by the UN and major government and corporate institutions behave as if their carbon capture and tree-planting alternatives are real options. “Their implicit premise is that market-based approaches will always work through policies that are most convenient to politicians” such as incremental legislation, taxes and subsidies.

In other words, what began as a radical green scheme a decade ago has been transformed into a mainstream policy “driven by a need to protect business as usual.”

There is some truth in that. Which brings us to the current net-zero environment, one that is still being driven by computer models managed by armies of corporate economists, financial experts and academics. Among the more influential in the modelling community are the major consulting firms that have become central sources of net-zero analysis and advocacy.

One of the leaders in the field is McKinsey, the global consultancy with many divisions dedicated to pursuing the latest trends in sustainability, finance, governance and climate policymaking. A recent McKinsey posting hails the arrival of “the Great Reallocation” of corporate activity. “Decarbonization will reshape the economy, opening new markets and imperilling others. Now is the moment for companies to spot green growth opportunities and move boldly to take advantage.”

McKinsey’s most recent report on net zero serves as a useful demonstration of how the concept has moved from its simple radical green origins to its complicated current existence as mainstream corporate and government policy.

The report — The net-zero transition: What it would cost, what it could bring — is far from a no-risk blueprint. Note, for starters, the change from “would” cost to what “could” be benefits, a hint that the costs may outweigh hard-to-identify benefits.

The report kicks off early with a graphic that sets out the Net-Zero 2050 scenario pathway, based on modelling from the Network for Greening the Financial System (NGFS), an organization run by central banks fostered by UN climate envoy Mark Carney. McKinsey worked with NGFS models to come up with a global outlook for the path to net-zero carbon emissions by 2050.

As the plan moves through time (see graph on this page), the main sources of carbon emissions decline, with electric power (coal, natural gas) declining rapidly over the next decade. Other sources — mobility, industry, agriculture — are all projected to collapse by 2050 when only five billion tons are emitted annually, all of it removed via carbon capture and other methods. 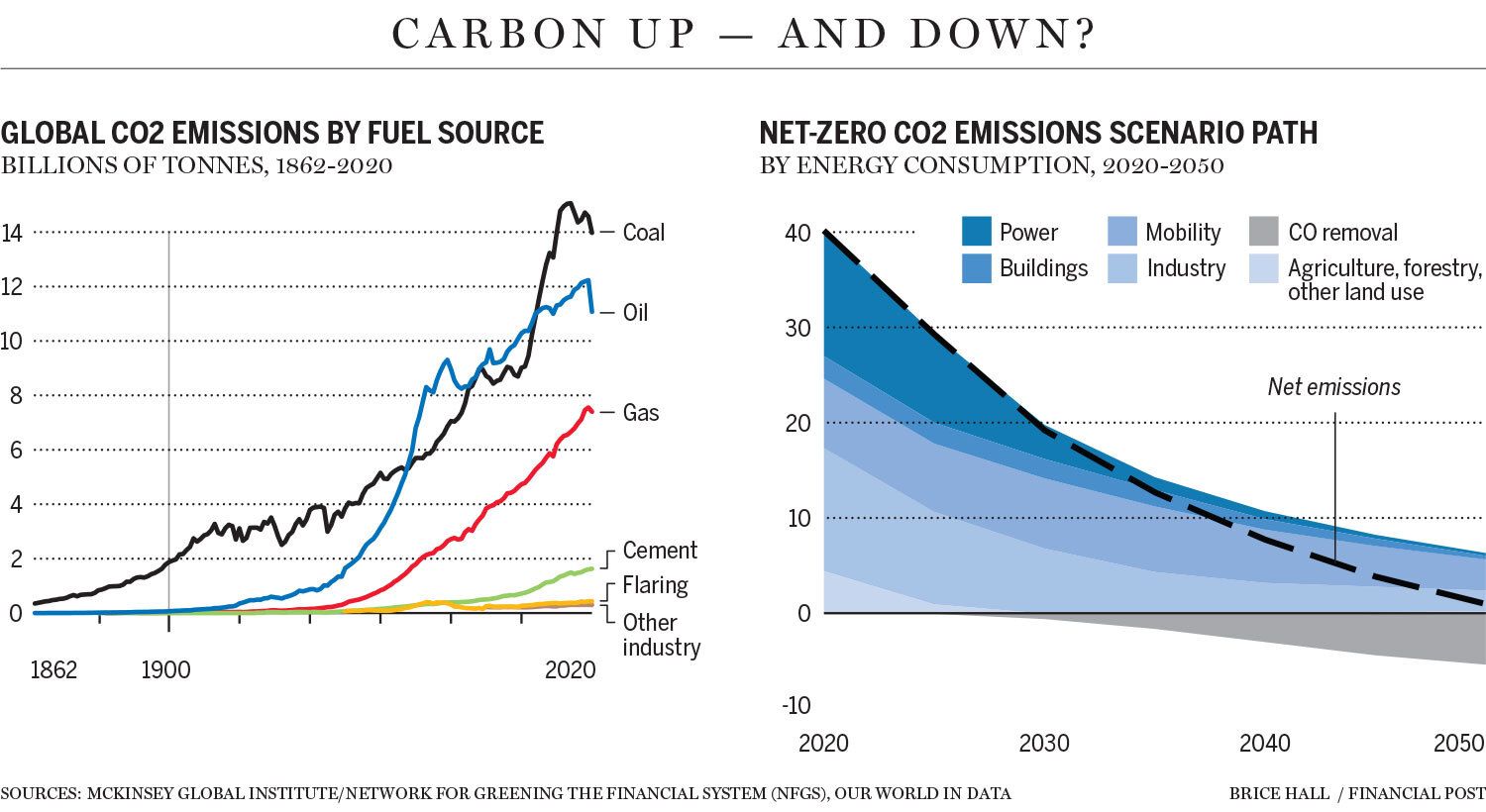 This path to net zero is in alarming contrast to the global energy experience of the past century. As Vaclav Smil puts it in his new book, How the World Really Works, we are a fossil fuelled civilization — a fact that McKinsey struggles to deal with throughout its report.

McKinsey estimates the cumulative capital spending needed to cancel and/or capture 35 billion tonnes of annual carbon emissions from coal, gas and oil at “about” US$275 trillion. At least it had the good sense to qualify the number. The risks behind such a “great reallocation” are massive, reports McKinsey, including uneven distribution of costs among sectors, geographies and communities.

Short-term risks include higher energy prices, with impacts on regions and social groups around the world. Electricity prices could rocket by 25 per cent through to 2040. Airplanes would have to fuel up on SAF — sustainable aviation fuel — produced from forest waste and biomass. “If not well managed, there is a risk that the transition itself would be derailed.”

The report is more than 200 pages long but it is far from being a rah-rah document for moving swiftly forward. “This research is a call for more thoughtful, decisive, and urgent action,” say the McKinsey authors. The words “more thoughtful” suggest a lack of same to date on the part of policymakers.

Shortly after McKinsey issued its report, Russia invaded the Ukraine, prompting McKinsey to issue a brief followup commentary titled “The net-zero transition in the wake of the war in Ukraine: A detour, a derailment, or a different path?” The question is never really answered. The war “will complicate the transition to a net-zero economy” but it “could” prove to be a turning point in accelerating progress in the medium run.”

At this point in net-zero history, it seems clear that the concept, born in easier times, is a mission in trouble. In Germany, where climate chancellor Angela Merkel adopted anti-carbon policies that led to the closure of coal operations and the adoption of wind and gas electricity, coal is making a big comeback, as it is elsewhere in Europe. Fossil fuels are also gaining in China, India and other countries aiming to boost their civilizations.

The radical zero in net-zero is moving further out of reach.

Original article an be found here. 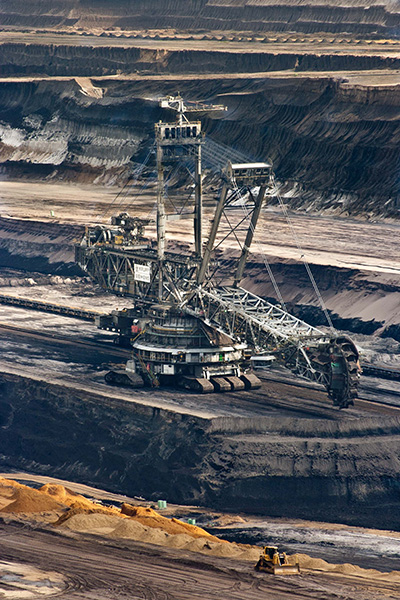